{DISCLAIMER: I was given a free digital copy of this book at the time it was published, for review.
All opinions and views are my own.} 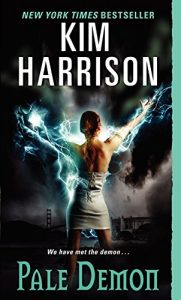 Pale Demon by Kim Harrison
My rating: 5 of 5 stars
I remember the first book I picked up in this series, thinking, “This is labeled urban fantasy? Do I even like urban fantasy? I don’t think I do….” But a synopsis or a quote from a reviewer, something caught my eye and I read it anyway. I was intrigued. I laughed so hard (Jenks the pixie and his derogatory Tink comments, oh boy!) and I was unnerved and completely hooked. It was like nothing I’d ever read before.

PALE DEMON by Kim Harrison is yet another amazing reading experience in a long line of amazing reads. This book in the series throws Trent, Ivy, Jenks, and Rachel—as well as a few other characters they pick up along the way— into a car on a road trip. Why? Rachel doesn’t know, Trent won’t tell her—and let the tension commence! Trying to get Trent to California in one piece, something Rachel promised Quen she’d do, is going to be harder then she thought. The wild-Elven-magic wielding assassins, the witch coven on her tail and Jenks going missing are just the start of this mysterious road trip. Throw in a soul-devouring demon that seems impossible to defeat, some breath-taking fight scenes, and the roller coaster that is Rachel’s relationship with Al (or Trent for that matter!) and you’ll be alternating between highs and feeling wrung out. And the end? It leaves you flipping pages in disbelief! “It can’t end there, can it?”

I love the twisty-turniness of Kim Harrison’s books that keep you guessing until the end. The character Rachel Morgan has grown exponentially and is so real, you feel like you must have met her at some point in your life. Every time Rachel is in a corner, I read all the more eagerly, knowing she’s going to pull something out of absolutely nowhere to send us flying in disbelief at her ingenious escape. This is usually followed by the author mercilessly slamming us with a plot twist! You literally cannot guess what is going to happen next. The author knows her world better then we the readers do and her world is expansive in a way that keeps the author from painting herself into a corner. Not in a way that is uncomfortable for us as the readers, if that makes sense; we feel safe, like walking through the uncertainty that is Wonderland, but having Alice holding our hand the entire time.

I love, love, love Kim Harrison’s Rachel Morgan series and I highly recommend it to anyone who is remotely interested in urban fantasy with a complex female character or who likes magic, mayhem, witches and bounty hunters! Oh alright, there’s also vampires, pixies, werewolves and elves!  Something for everyone!